Skip to content
+44 7588 030313info@shuniya-yoga.org
The San Jiao or Triple Warmer/Burner/Heater or Triple Energizer meridian (it goes by many names in English) is one of the 2 Yang meridians of the Fire element, and has the Heart and Pericardium meridians as its Yin counterparts.
San Jiao refers to the 3 origins in Chinese medicine: heaven, earth, and water. The 3 ‘burners’ are pictured below: the upper jiao or burner receives ethereal influences and is associated with heaven. The middle burner is associated with the earth element, and the lower jiao is associated with the drainage of water.

Every full moon in Capricorn will affect this meridian, opening up a window of opportunity to more deeply balance this meridian, but also opening up a time where we might feel its imbalances most. These windows last from approximately a week before to 4-5 days after – some people will be more sensitive to it and experience a longer period of being affected.

The San Jiao or triple burner is/are not a physical organ – it is a matrix of connective tissue or fascia, only recently discovered by Western medicine: think of fascia as membranes that envelop every muscle, bone, organ in the body, but that also form our ligaments and tendons, and that help each part of our body communicate with one another and play a role in keeping open the flow of Qi or Prana. One could say that the triple burner provides a passageway along the primary Yin Yang vertical axis between the fire of the kidney and of the heart (sometimes called the ‘ministerial fire’).
The picture below shows this meridian’s passageway highlighted in red. This meridian begins on the backside of the ring finger (the same finger in which its partner meridian, the yin Pericardium meridian, ends) and runs over the back of the hand, the wrist and lower arm, passes the outer point of the elbow and runs along the back of the upper arm to the back of the shoulder. Then it comes to the front of the body and enters the chest beneath the sternum, where it branches: the main branch runs downwards to the pericardium and continues down through the diaphragm to the 3 burners. The second branch ascends along the side of the neck, circles the back of the ear, and then circles the side of the face. Another small branch emerges from the back of the ear and connects to the Gallbladder meridian at the outer corner of the eye. 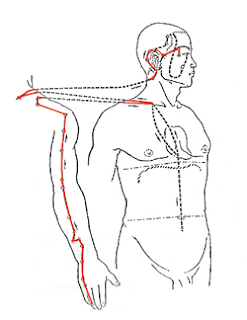 The triple burner meridian controls our prana (life force — what in Chinese medicine is called Qi) as well as the distribution of energy in three main areas: 1) the chest, which is responsible for breathing (heaven association); 2) the abdominal cavity which controls digestion (earth association); and 3) the pelvic area which is in charge of elimination as well as reproduction (water association).
The triple warmer is a Fire element meridian in the Chinese system. Fire energy goes up, against gravity. The Fire element is concerned with moving from the material realm to the spiritual realm through purification (alchemy through fire). But guidance is needed to succeed, which is why we need a Guru. The triple burner also controls appetite, thirst and body temperature and coordinates digestion, communicating with the Spleen and Stomach.
Moreover, the triple burner rules body liquids to keep them moving. It aids in transforming body fluids and it balances the Prana or Qi between the upper, middle and lower areas. Most importantly, the triple burner delivers Original Qi to all organs.
Importantly, Capricorn and the triple burner meridian rule the glandular system — the guardians of health and emotional well-being, and of stability in infinite consciousness. Our glandular secretions determine the blood chemistry, which in turn determines traits of our personality, our moods and our emotions, including surges of pleasure and displeasure. If, e.g., your thyroid is not functioning well, you will likely find yourself lacking in patience and tolerance.
Physical symptoms:
Tips:
Things that are good to eat:
Yoga for Triple Burner: 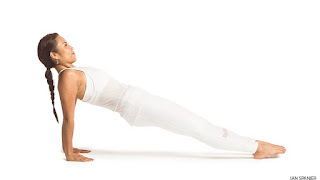